Perhaps this website should change its name to Idahoans Against the World Economic Forum (WEF) Great Reset.  Power for the Agenda 2030 Sustainable Development Goals (SDG) has now shifted to the WEF in its Strategic Partnership Framework agreement with the United Nations (UN), the purpose being to implement and fund the SDGs.  However, the historical background of Agenda 21 and 2030 is important in understanding what has been enacted upon the world, creating the stage for the WEF to have complete control.  Technically, all three are the same agenda.

Agenda 21, also known as Sustainable Development, is a United Nations (UN) action plan to promote global governance through the fundamental transformation of how and where we live, what we grow and eat, our economy, control over all production and consumption of resources, and what we learn and teach.  Unveiled in 1992 at the UN conference in Rio de Janeiro and signed by GHW Bush, Agenda 21 was then implemented in 1993 by WJ Clinton via EO 12852, the President's Council on Sustainable Development (PCSD).  Federal agency Secretaries were brought in to form the council, along with business leaders and NGOs, to establish a charter, all to implement ten goals, aligning with Agenda 21.  Agenda 21 has been implemented in every country in the world, using misleading terms such as economic development, public private partnerships, regionalism, for future generations, and sustainable development.

The Environmental Protection Agency was one of the first federal agencies to implement Agenda 21.  On page 45157 of the Federal Register Vol. 63, No. 163 Monday, August 24, 1998 Notices, it clearly states, "The Sustainable Development Challenge Grant program is also a step in implementing ‘‘Agenda 21, the Global Plan of Action on Sustainable Development,’’ signed by the United States at the Earth Summit in Rio de Janeiro in 1992."  In 2002, the U.S Department of State was preparing for the Rio conference while supporting and promoting  "sustainable development".  Since that time, Agenda 21 has been integrated into all federal legislation and regulations, sometimes under the term "Sustainable Development".  There is no conspiracy regarding Agenda 21, it is factual that the federal government and other entities have been implementing it, without any congressional authorization.

With Agenda 2030 the 40 chapters in Agenda 21 were narrowed down into 17 Sustainable Development Goals (SDG).  It is easy to recognize how much has been implemented by reading both documents.  Sustainable is a common word now, everyone is encouraged to conserve, people believe land should be placed into different forms of conservation or protected, and anything green is acceptable.  Read the documents and do a comparison of them, the language in them, and what you see happening in your area.

The United States is not a democracy, we are a Republic, a nation of laws.  Agenda 21 violates this foundation with erasure of jurisdictional boundaries (regionalism), collectivism, and destroys all concepts of individual liberty.

Agenda 21
The Agenda 21 plan for the 21st century has three identified pillars:

Agenda 21 and 2030 were never about the environment, it has always been about transforming our economy from capitalism to a resource based economy achieved by:
EDUCATION

While not technically listed as a 4th pillar, education is a primary vehicle integrated into all aspects of the other pillars achieved by:
Sustainable development, through technocracy, results in control over every aspect of human activity.  As seen today, emphasis is placed on science, non-elected scientific experts, and studies are cited that often originate from the UN which are usually manipulated for UN objective outcomes.

The reality is that the UN, along with all of its partners including our government, is creating a global world and forcing us to live in it. 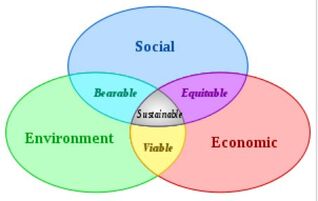 Agenda 2030
Agenda 2030 was launched in 2015.  Although not a replacement for Agenda 21, but rather a continuation of UN goals, it regroups the same objectives into 17 sustainable development goals (SDG).  The same pillars are integrated throughout the goals for social change, the environment, and transforming our economic structure.  By far it is much easier to read and more clear with specific objectives and targeted goals.
World Economic Forum

One ominous organization, the World Economic Forum (WEF), is becoming a more prominent force in implementation of the SDG.  Recently the WEF and UN signed a Strategic Partnership Framework that intends to fund and accelerate Agenda 2030.  WEF platforms include every Agenda 2030 issue.  Partners of WEF include massive numbers of large corporations from every industry sector, including AARP, AT&T. Apple, Facebook, Google, Micron, Microsoft, Coca-cola, Visa, Walmart, pharmaceutical companies, banks, energy sector industries, and even the YMCA.  Keep in mind that these are corporations that have signed on to implementing SDG and many have partnered with the UN for years.  Through media partnerships the WEF is capable of manipulating and suppressing information.  Here are some WEF projects that are developed by partners.

The WEF holds annual meetings in Davos, Switzerland where they connive on how they want to control our world.  WEF created a manifesto in 1973 that guided their ideology.  A new 2020 version of this manifesto highlights the 4th Industrial Revolution which is primarily about creating a digital world that will replace our traditional capitalist form of the economy, and is the foundation for its Great Reset Initiative.  Globalization and global governance is the goal that will be accomplished through its corporate partnerships.  The powerhouse behind the WEF is much greater than the UN could ever be.  If anything, Agenda 21 appears to be obsolete from the advances being made with the WEF and SDG.  Regardless, our rights of freedom, liberty, and self governance are being destroyed, including our Constitution.  Covid-19 is being used as justification for the Great Reset.

Agenda 21 impacts everyone.  In order to implement Sustainable Development projects, proponents have taken control of our lives in a myriad of ways, most accomplished through regulations and legislation affecting education, energy markets, transportation, health care, food production, land use, and more.

This control is achieved via regulations.  Industries are regulated by government agencies, often without any legislative authority, which chokes production and bankrupts many companies in the process; those that survive do so by passing on the increased price of doing business to you, the consumer.  By limiting the market through regulation, the government limits your choices as a buyer.

On a larger scale, you can see Sustainable Development at work each time Eminent Domain is used to steal property for the 'public interest;' because this law is being abused by both environmental agencies and planning/zoning departments, no property owner is safe from it.

Sustainable development is also responsible for the closure of dams and rural roads, controlling where we can live by reducing access to land and energy.  The introduction and protection of animal species detrimental to local farms and ranches is another program in-line with the objectives of Agenda 21.  The current debate over Common Core, a highly Socialistic education program being implemented in our state and across the country, is one more example of the far-reaching grasp of Sustainable Development.

In short, Agenda 21 limits your personal freedoms and state sovereignty at every level and will become more and more apparent as control increases.

Many Americans are working hard to stop implementation of Agenda 21 goals at a local level.  This can be the most effective way in which to stop Agenda 21 objectives.  At the federal level it is more difficult.  Many elected officials dismiss the UN "conspiracy".  This is why educating Americans on Sustainable Development is so critical to stopping it.  Once enough attention is brought to the negative impact of Sustainable Development, communities can take action against it.

The goal of this website is to help concerned Idaho citizens learn about and understand both Agenda 21 and Agenda 2030, but now also the WEF Great Reset initiative which is just another name for the same agenda, with the focus primarily on issues which directly target Idaho communities.
Agenda 21 has been embedded in every level of our government.  Because of this vast reach and the two decade head-start, many are overwhelmed when they first learn of Agenda 21 and may feel that battling this modern-day hydra is impossible-- but it is possible and battles are being won every day!

In order to impede the advance of Agenda 21 and now Agenda 2030, we need to begin at the local level; this is your neighborhood, your city, your county, your state.  Idaho must regain-- and then retain-- its sovereignty.  But this depends on YOU!

If you value the blessing of freedom and you love this state, it is your duty to stand up now.  Here are several ways that you can join the fight:

Educate Yourself - Study the founding principles of our country (primarily the Constitution and Declaration of Independence) and become familiar with your rights and responsibilities.  Also study Idaho's Constitution and laws.  It is knowledge and utilization of these laws that make it possible to overturn Sustainable Development programs.  Of course, it is equally important to learn as much as you can about Agenda 21, as well; visit the Resources page for links to original source documents and a variety of materials that expose the truth of Sustainable Development.

Get Connected - Begin attending community meetings in your area.  Whether it's the school board, homeowner's association, or city council, each of these bodies has the power to implement Sustainable Development programs-- and they will unless we speak out.  This is also a great way to meet other Idahoans who are becoming aware of Agenda 21.  If the locals in your area are still in the dark on this issue, do your part to wake them up by setting up a booth at a local event and answering questions or passing out fliers.  If there's enough interest, start your own Idahoans Against Agenda 21 chapter.

Pick a Project - Agenda 21/2030 as a whole is overwhelming in its size and scope.  The only way to dismantle it is one step at a time.  Getting involved in your community will make you aware of various issues impacting your neighborhood, city, county, and state.  Start with one or two projects you're passionate about and bring attention to those issues through petitions, rallies, news interviews, blogging, letters to politicians or local celebrities, and possibly even running for election yourself to help combat the problems from the inside.  As you continue to get more involved and meet others who are willing to help, you can expand your focus to larger tasks.

Lend Your Support - As Idahoans become aware of more issues affecting our state, everyone should participate in rallies, petitions, letter-writing campaigns, legislation, and speak at events, and other activities.  Whether you show up in person, link us on your blog, or tweet about our goals, your support and promotion of these events will help us get the word out and grow the movement.

Don't Fund The UN - It's difficult to completely boycott an entity as large as the UN but it's important that we spend our money as wisely and responsibly as possible-- and that includes researching who you're giving it to.  Many American companies are UN business partners, so when you purchase from them, you're directly funding the opposition.

Technocracy - This is sustainable development, everyone should take the time to learn about it.  It is the method by which sustainable development is being implemented.  Using technocrats, scientific and other "experts", the goal is to drive us into a digital world where data can be gathered, monitored, and then decisions made on how we live.  Information about technocracy can be found under the Resources tab.

Below is a short video that explains Agenda 21.